Everybody should be able to participate in digitalization.

Digitalization opens so many doors but still leaves some out in the cold” – putting in the work, messages of love, and big dreams. 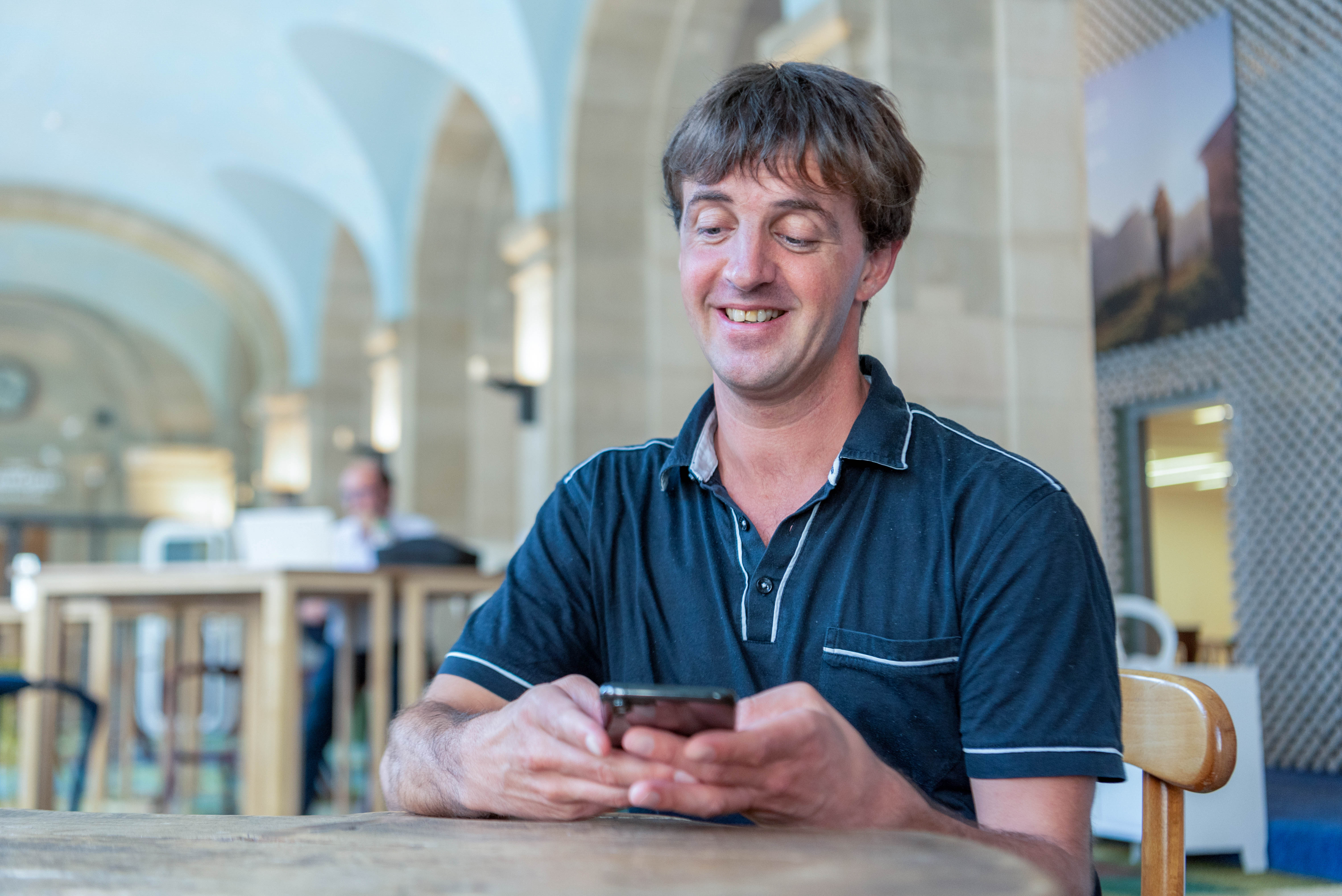 Today’s interview is with an intrapreneur whose brainchild has made it through to the GoldBox phase of Kickbox. Marcel Roesch is Head of Swisscom’s Film Team, and his project help2type GmbH – a tactile keyboard for smartphones – was born out of his own experience as a person with low vision. We spoke to him about storytelling, letting go, and the future of help2type.

Marcel, can you sum up the concept behind help2type in few sentences.

It takes ages, right? Of course, you could use the dictation function, but who wants to dictate business emails or messages of love out loud in front of others? I think you can agree that this isn’t the best solution. Having experienced these issues myself, I developed help2type as a solution to the problem. It is a tactile keyboard that connects with your smartphone via Bluetooth. With help2type, those with visual impairment or low vision can write on their phones in public without unwantedly sharing their contents.

What drove you to apply for the Kickbox program?

The rapid progress of digitalization means that people are spending more and more time on their smartphones, and I found myself worried that I would lose my connection to the world if I weren’t able to keep up with the fast pace of the digital world. I believe that everybody should be able to participate in digitalization and wanted to help myself and others in a similar situation to do so. Digitalization opens so many doors, but it still leaves certain groups out in the cold. help2type might not be a product for the masses, but it’s all the more important for the target groups. So, I took the opportunity presented by Swisscom to make my idea a reality.

Your project is now in the GoldBox phase. Tell us about your experience with the Kickbox process.

rready provides excellent orientation when taking a concept from an idea in your head to a real-life product that people will buy. It gives you the tools you need, but you have to use them, which means a lot of work. The best tool in the world can’t help if the motivation isn’t there. The challenge rounds were particularly suspenseful, but if you had done your homework, then you would be ok. The biggest obstacle in the Kickbox process was the move from the RedBox to the BlueBox phase, which requires you to find a sponsor. Again, this will only work out if you’ve done the work. Luckily, I had done the work and also met a great deal of helpful and inspirational people along the way. So, I actually had my sponsor before I’d finished the RedBox phase. After that, the step from BlueBox to GoldBox didn’t feel quite so large. And now, we’ve moved into mass production, and help2type is available to the public!

But surely there were challenges along the way too? What was the greatest one you faced?

In May 2020, we went to meet the Chief Engineer in charge of the prototype, and of course, he had some feedback for us. What I hadn’t expected was that we would completely pivot our idea in that one meeting. The prototype looked great, but he soon pointed out that the input method we had originally planned would not work stably, which would affect the product’s quality. Interestingly, once he had explained the problem to me, it didn’t require any persuasion – it just clicked. Within 10 seconds, I knew what we had to do and had decided to make the change. It was painful to let go of something that had been so key to the product before, but it was a necessary step.

What are the three most important things you learned during the process so far?

The first thing would be to give things a try without thinking about it too much. If it works out, great; if not, you learn from it. Of course, you can’t apply this to everything – some things definitely need to be perfect, but there are many areas where trial and error work well. The second is in a similar vein, and that is to be brave and take risks.

Finally, I learned the importance of talking to as many people about your ideas and challenges as possible. I mean, really speak to them, not just exchange emails. This is the most effective way to get feedback, and sometimes it’s not the expert that will help you but someone you might not have expected it from.

And what are your plans and aspirations for the future of help2type?

Well, we started to sell to the public some time ago (2020), so we’re currently in the process of completing orders (around 70 in the first week) and collecting customer feedback. We’re focusing on our main target group, people with visual impairment and low vision in Germany and Austria, but we are looking to expand to the rest of Europe and the US next year. Then we plan to access the secondary target group of seniors towards the end of 2020. Of course, we will continuously collect feedback, which will go into version 2.0 and a premium version.

Long-term, I’d like to add a service provider element to help2type for corporations. Maybe I can provide services to companies like Apple one day. But one thing after another.

You certainly seem to be on the right track. We look forward to seeing what the future holds for help2type!

You can find out more about help2type here.