Professional yet agile: Culture and leadership in the shift from the corporate to the startup world.

rready Team
05.August 2021
When rready co-founder Dave Hengartner joined Swisscom in 2015, he had already gained a wealth of experience in both startups and the corporate world. You could say he had a foot in both worlds. Now, after developing GETKICKBOX from a side project to a full spin-out, he’s made the move from the corporate world back to startup. Today we spoke to him about culture and leadership in startups versus corporations and the changes taking place at rready. 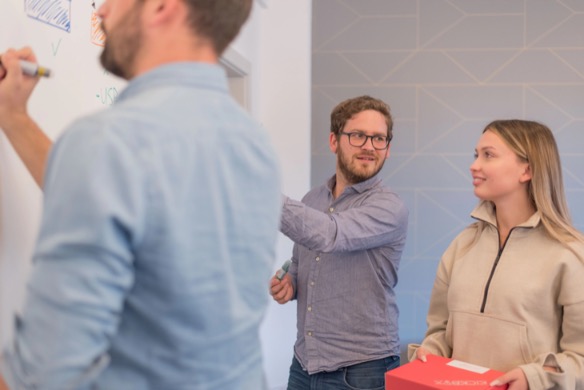 Hi Dave, let’s start at the foundation. What would you say is the most significant difference between startups and corporations in relation to leadership and culture?

Startups and corporations are fundamentally different from each other in so many ways. But to put it in a nutshell, the defining factor is that corporations are built on existing processes that are improved slowly over time, while startups are about coming up with something new from nothing – new products, new methods, new approaches. This fundamental difference has a huge impact on culture, teams, and leadership.

How does this affect culture within a startup?

Since you’re always trying new things and developing from there, cultivating a culture where it’s ok to make mistakes is vital. We talk about this a lot within rready, and it’s the same in any startup. You need this so-called “failure culture,” but you also need to ensure that you learn from each mistake. Of course, you shouldn’t be celebrating failure if you don’t learn anything in the process. Instead, you want to give people the space they need to try things out and potentially make mistakes, but also encourage them to learn quickly and improve. This requires and simultaneously promotes an open and active feedback culture. Startups are often made up of small teams who work together very closely, so the culture must allow people to be open and honest. This is the reason why team building, and team events play such an essential role within a startup culture – whether it’s a teambuilding weekend, after-work drinks, or a virtual escape room (COVID forced us to be creative). These events not only bring the team together, but they keep the spark alive. Working at a startup is like riding a rollercoaster, so you need to cultivate a culture that keeps people motivated even during the harder times. At the end of the day, startups blossom in fast-paced environments with a lot of uncertainty, so the culture needs to support that.

So would you say it takes a certain type of person to work in a startup?

Definitely, since the approach and culture are so different, the people need to be too. In a large corporation, you need harvesters, people who are good at managing and improving processes. But in a startup, you need bold and creative people who are always on the lookout for something new and open to constant shifts and change.

As I mentioned before, it can be a real rollercoaster, so working in a startup requires commitment. For example, when I first came into a startup environment, I’d been working at a large bank. This move was so eye-opening. Suddenly, people were walking around the office wearing T-shirts in the company branding – you would never have seen that in the bank. I realized that the team here really enjoyed what they were doing and loved coming to work. This intrinsic motivation is key for startups. After all, you could have a much more comfortable life working in a large corporation. You’d have a secure job with a fixed salary, you can fade into the background and hide behind the processes. Working in a startup can be much more demanding, but the team knows that they are part of something and that their work has a direct impact rather than being a small cog in the machine.

The other advantage for team members is that they can grow and advance much more quickly – regardless of age and experience. In a typical corporate career, you might work 10-12 years to get to director level. Whereas, in a startup, you could become a country director in two years, if you’re the right kind of person, of course. But really, the sky is the limit.

How do these dynamics shape leadership in a startup?

In general, I’d say startups function better with flat hierarchies, where everybody might take ownership of their part of the business, but they also chip in to help others when needed. You don’t have the luxury of unlimited resources, so you need to get things done with what you have. This requires everyone to take responsibility for their own work from day one. You’ll probably be thrown in at the deep end more than once, as I certainly experienced myself in the past. However, this way of working provides an excellent opportunity for personal growth and progress. You learn so much right from day one.

Since it can be a bumpy ride, it’s also essential that there is a certain awareness within the team. That means you’re not just in your own little bubble doing your tasks, but you’re aware of your team members and are there to provide support when they might need it. This is part of the agility a startup requires. And there is no room for politics; you simply don’t have the resources or the energy. If things start to get political, you know you’ve somehow come off the path.

Which challenges do you now face as you have shifted from a business unit within a corporation to an independent startup?

We’ve spent the last twelve months preparing ourselves for just that, but it’s challenging. It’s also a very exciting stage to be in – we can achieve so much more because we’ve (hopefully) learned from our past mistakes, and now we can take the parts that worked and turn them into fixed processes. We’ve already made great progress in terms of growth thanks to Ralph, co-founder and Head of Growth, social media and marketing, and product development, but we still need to make a shift as we spin out so that we don’t lose our experimental mindset. We’re lucky to have great minds on the team, such as the other two co-founder Reto and Vinz, who are constantly trying out new things, while there are other parts of the team that are focused on executing what we know already works. We believe this balance will allow us to continue our success through this shift and into the future.

A sneak peek into working as an intern at rready

How to Improve Corporate-Startup Collaboration